EveryMove is an app that converts physical activity into real-world rewards. Add any physical activity or connect your phone or wearable device and the app will give you rewards for being active. As the principle designer of the iOS & Android apps, I ran design meetings and gathered feedback from stakeholders, aligned on requirements, prototyped, designed & deployed a complete mobile experience in the first six months. I reviewed metrics & spear-headed updates focused on retention and simplifying the user experience. Refinements to the “Add an Activity” flow and the addition of progressive onboarding resulted in a huge improvement on mobile core tasks from about 50% to about 70%. This included adding your first activity, connecting your social networks, and creating an account.

I also lead the design team on a brand refresh and redesign of the brand, website, and mobile apps. 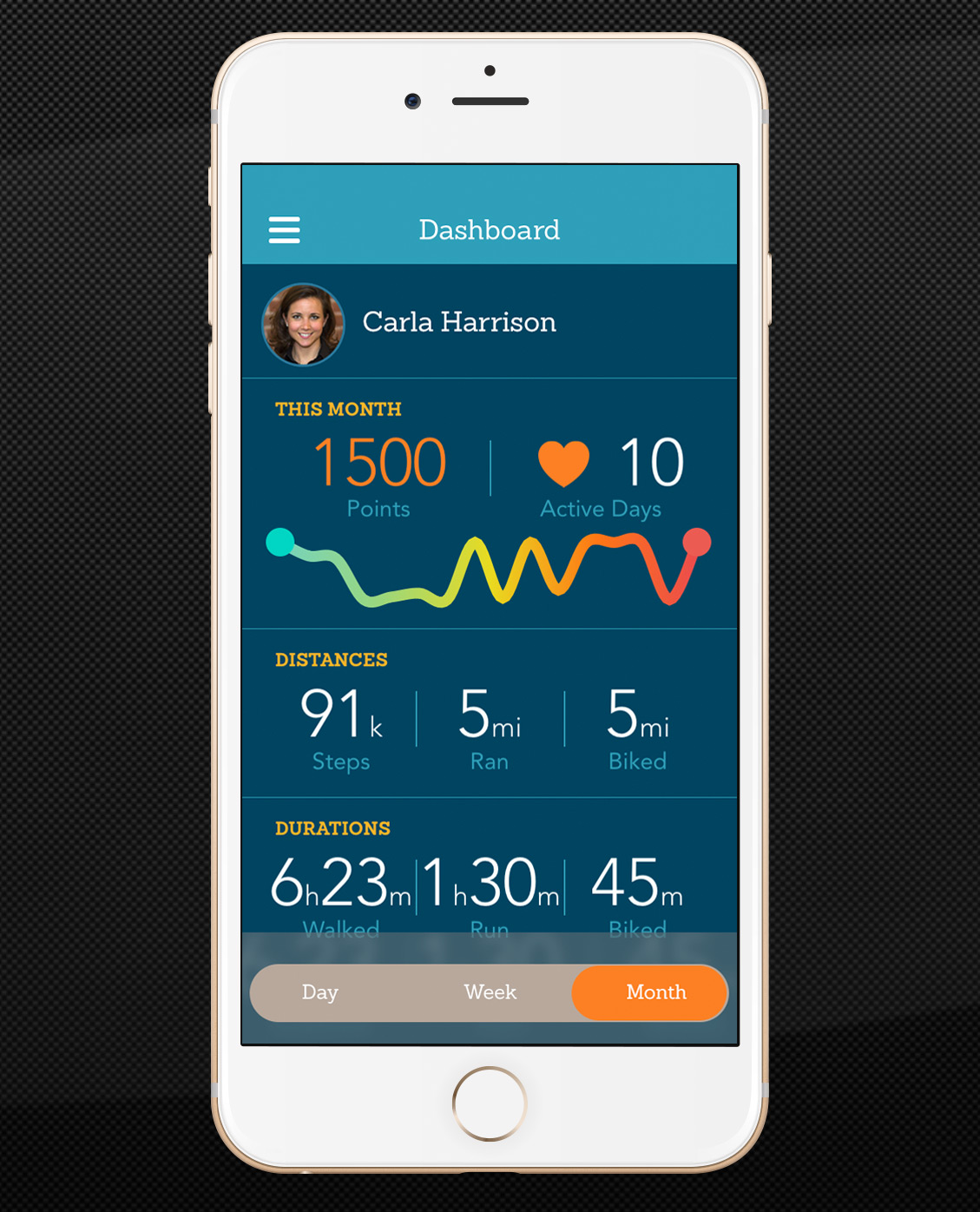 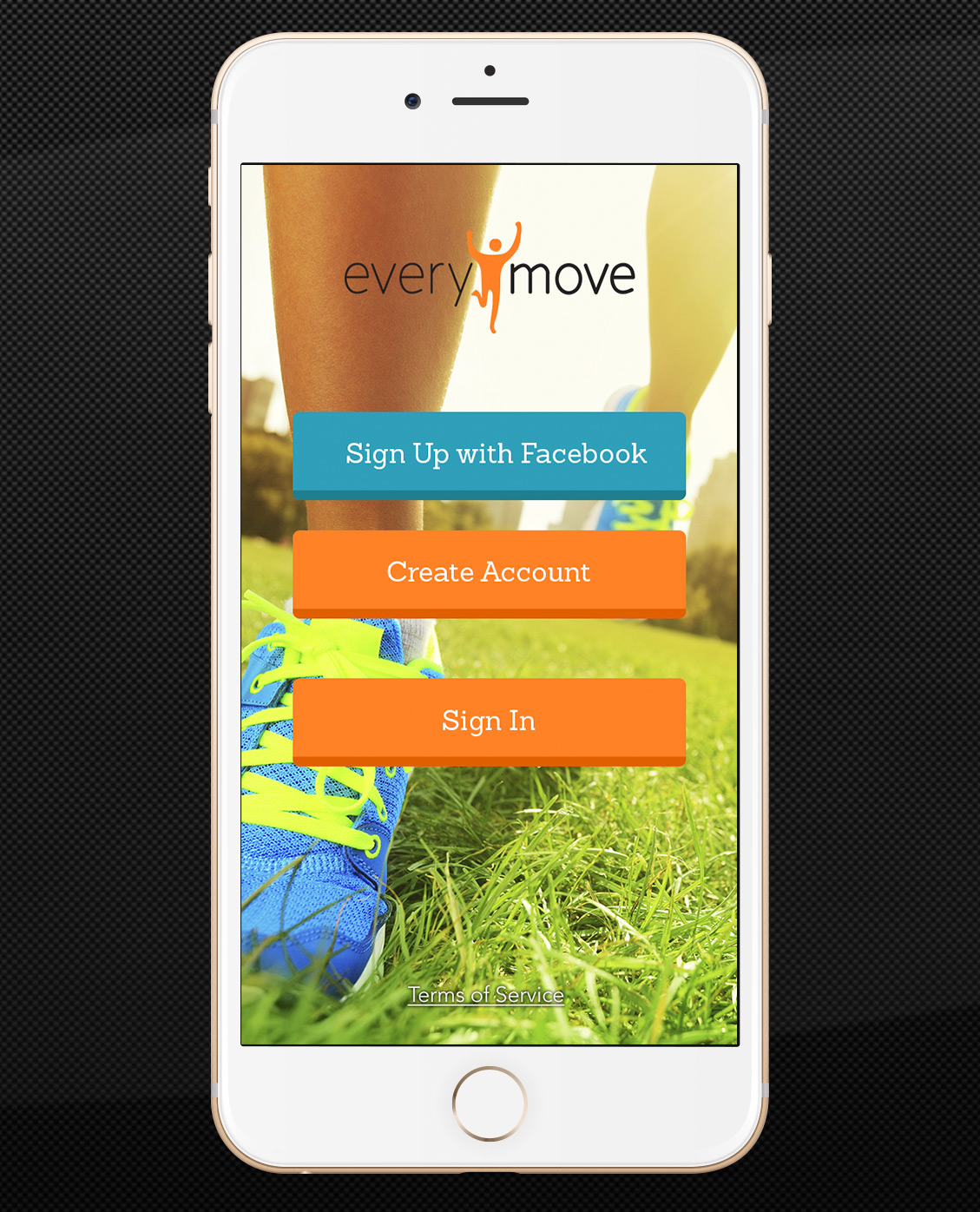 The intent of the app is to be your hub for working out, celebrating fitness goals, tracking all of your fitness data and activities.There are two methods to get your fitness data into EveryMove. One is connecting an app or fitness tracker and syncing your data, the other is manually entering your activity via the mobile app or website. My task was to create a seamless way to enter your activity and encourage user's to continue on their fitness journey.

The average use case is that a user just completed an activity like working out or a run and wanted to quickly enter what activity they did, how long they did the activity and any notable details about that activity. The person would most likely be using their mobile phone and taking rest during this process and likely be at the gym or outside. 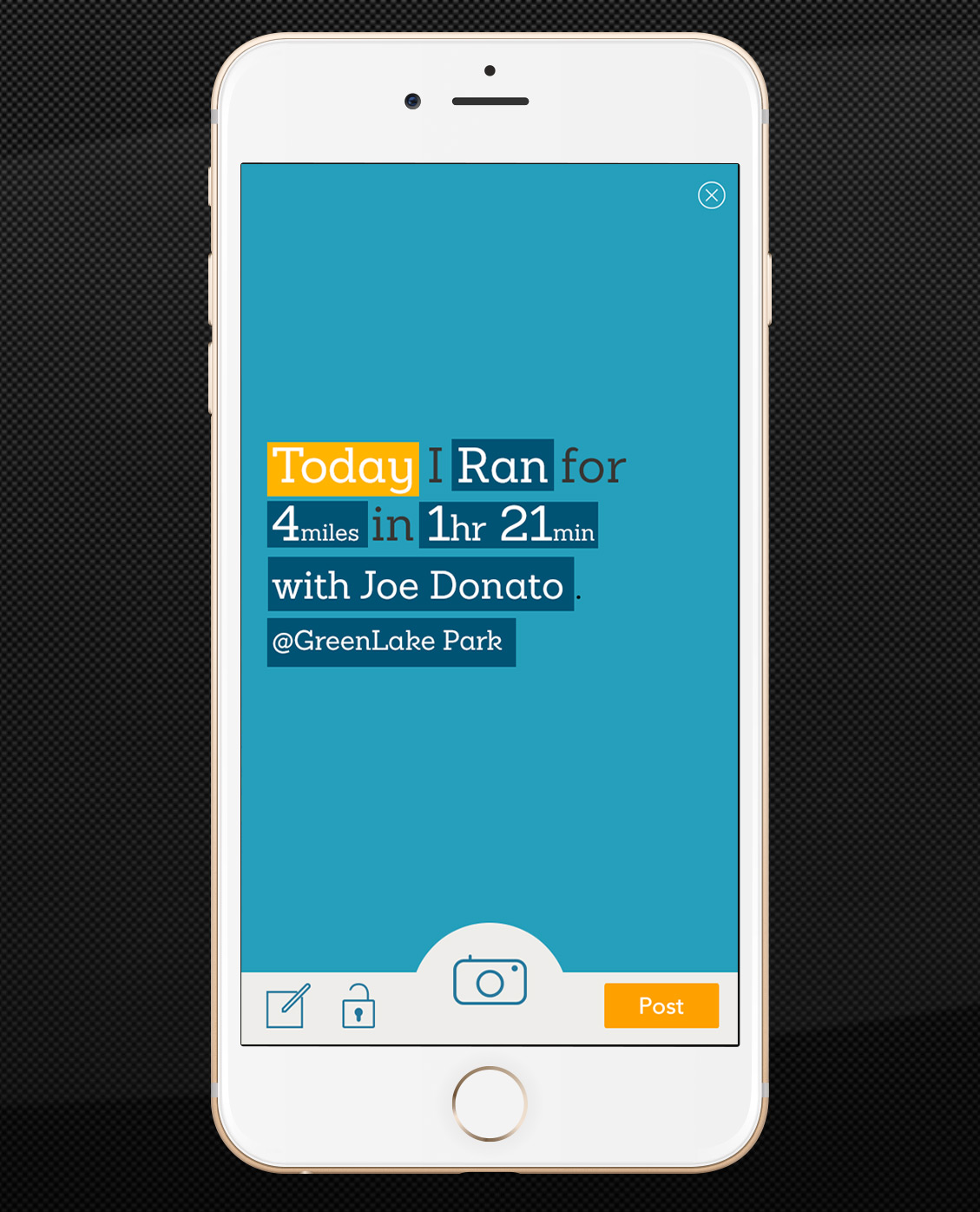 The primary challenge we faced was the sheer number of options and sub-options for adding a simple activity. It was too many choices, too complicated, and through research we found many people gave up because they could find the activity they were looking for. We wanted to support as many activities as possible but also simplifying the UI to enable user's entering repeated actions with ease.

For example, if a user wanted to log a run they would need to fill out:

The old "Enter an Activity" screen

My first reaction was there were simply too many options for a single screen. When you present too many options to a user many users simply shut down and abandon the action, rather than deal with the cognitive load of trying to figure out all the inputs available on this screen. The idea of choice paradox that when shoppers choose a laundry detergent in the grocery aisle the stores purposely only give the user a limited amount of options because if you give a user too many choices they often quit and move on to something else.

The user base for EveryMove was very loyal and engaging. We scheduled a jog around downtown Seattle and then I got a change to do member interviews and live testing of the app. I cannot emphasize what a breakthrough it was to actually see members using our app in-front of me. I collected all the feedback and then presented my findings in the all company meeting. It showed the following:

I was enamored with now defunct Facebook's app of Paper. Paper was a twist on the facebook experience to make you focus on one to three stories at one time, rather than a never-ending vertical feed. It reminded me of a combination parts of facebook and Flipboard. It also had some pretty nifty user based actions like swiping down to close a page. I paid close attention to their "Adding a Status Update" screen because it closely mirrored the business goals of the "Add an Activity" flow I was tasked to do.

Another important aspect was the social sharing component of our app. We noticed that when people posted "I ran for 2 miles" it didn't get many likes. But if someone shared something interesting like "I just broke my personal record of 10 miles today!" it suddenly became much more interesting to our users.

Posts were broken down along the following:

A: The user had a photo they wanted to share with their friends on EveryMove (Story/narrative)
C: The user had just finished the gym and wanted to see if they got an active day for their workout (fact)In both examples, we would want to give them the opportunity to enter either an activity or a story about the activity, so they start in A and end in B, or start in C and end in B. So the start of any entry is what the user wanted to enter in the moment, and the end is an opportunity to add more.

“I'm a creature of habit. I go running twice a week around my neighborhood. I love that your app sync's with my Fitbit but it would be better I could record my runs with just a tap or two.”

Some of the key takeaways from the Facebook Paper app was to have each screen have a smaller focus on one or two tasks and then put them into a quick and easy flow. This reduces the cognitive load of too many options and also solves the problem of different activities having different metrics that needed to be tracked.This is often something hard to convey in a flow. I've definitely had product managers say it looks like to many screens, but when they see a working prototype or build they got what I was trying to achieve right away. Entering an activity could be broken down into two categories: Story/narrative and fact. Namely, what did you do and then how did it make you feel?

My initial design meeting went very well. Rather than putting everything in one screen the flow was reworked to be:

Through user research and taking a dive into the metrics we found out activity, duration, and distance where the primary actions and tagging,setting the date, location, and privacy where lesser used secondary actions.Also, the Activity Summary screen served as an anchor for the user to add details, or if they were in a hurry they could enter the minimum amount of details and still post the activity.

In the previous version of the app there was a feature of marking an activity as a favorite.What I found out was it was a hardly used feature and that most of our users only did the about 4-5 activities that they repeated each week. My solution was to scrap the idea of favorites and for the app to simply remember your most popular 5 activities and show those in the choose activity screen and show this first in a searchable list of all activities.

Through the design process we kept coming back to the fact that our brand wanted to be more human and promote a conversation between users. We were already seeing poor engagement with users after they posted their activity. How can we make people's workout more engaging? If users weren't commenting or liking a post that read "Jim ran for 4.2 miles in 20 mins"what would make me personally give someone a word or encouragement, or ask a question about their post? The key was giving some insight into a user's activity. 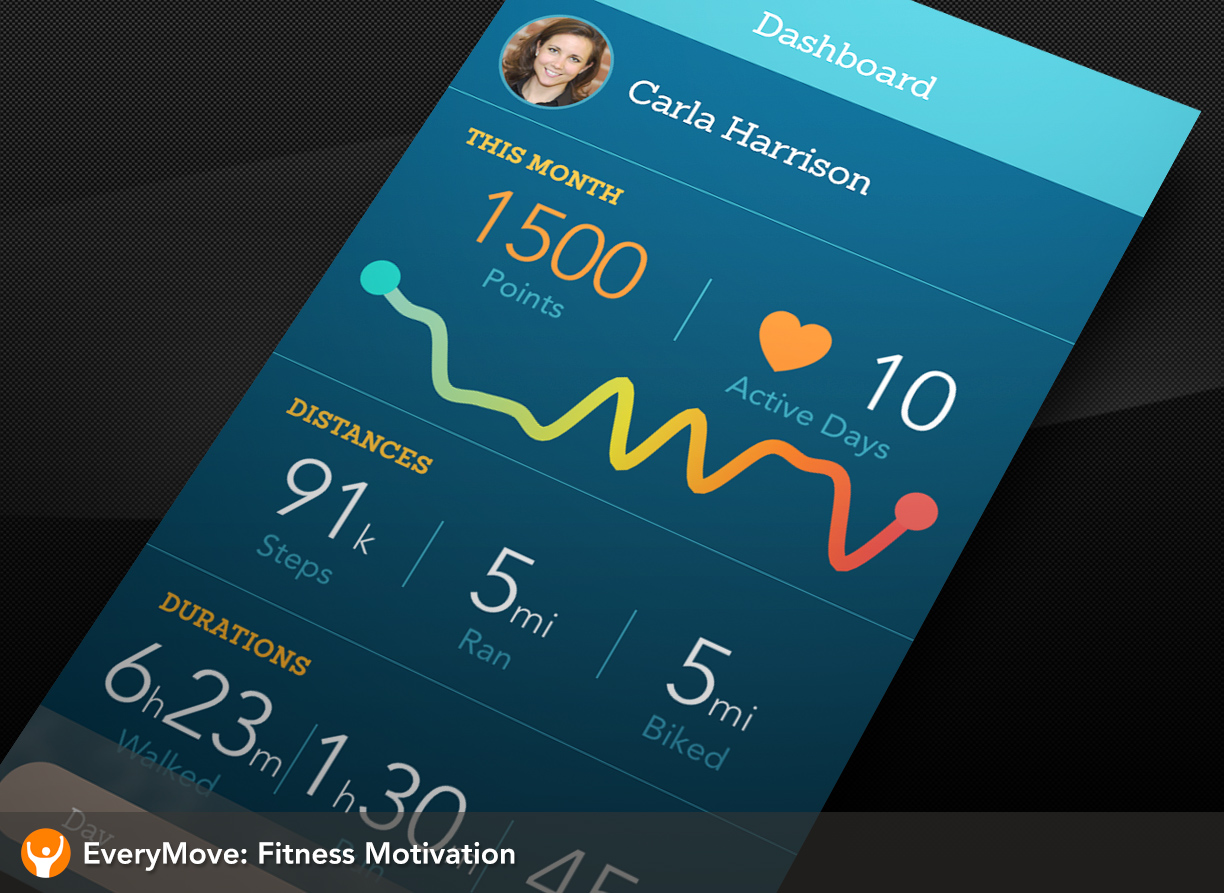 Once more with feeling

This came what I called the "Once More with Feeling Flow" where we isolate a lesser used feature of making a note. After an activity is entered we simply ask How did it go? .

The key was adding context to the activity.If you went on a hike I am more likely to comment on a post that said "I went on a hike and forgot to pack dry socks" than the robotic post of "Joe went on a hike for 10miles for 2hrs at 4000ft elevation". We began to refer to these new types of posts, Posts with personality. Adding a human element to the activities, added a human factor, and gave the post an interesting nugget to interact with.

back to project
back to Top